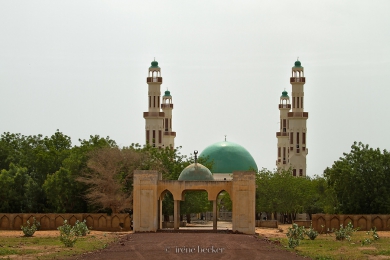 the caliphate of Sokoto was the largest and most populated state of nineteenth-century Africa.

According to a nineteenth-century account, it took four months to travel from west to east and two months to travel from north to south. The caliphate was organised as a decentralised state seeking to establish Islamic law over its large territory. The jihad and caliphate officially ended with the 1903 British conquest, but has since been widely studied and its legacy endures today, especially in Nigeria. Many observers have tried to understand the jihad, the caliphate and especially the figure of Usman dan Fodio. The jihad, itself at the origin of a rich Islamic scholarship, has now given place to a wide and varied literature.

The jihad and the creation of the caliphate

For dan Fodio, the main reason for the jihad was the purification of Islam in territories which were already Muslim at the beginning of the nineteenth century. The legitimacy of his struggle stemmed from his belief that, until this point, Muslim leaders had only practiced an impure form of Islam.

Some historians understood the jihad of Sokoto as a revolution because of the Hausa kingdoms’ socio-economical inequalities at the beginning of the nineteenth century. Dan Fodio’s success rests on his preference towards a form of equality and his proclaimed fight against corruption. As a champion of the people, dan Fodio launched his fight against the king and the aristocracy of Gobir in 1804. Even if the social dimension of the jihad should not be totally neglected, dan Fodio himself declared mainly religious reasons to be at the origin of the jihad in Kitab al-Farq. Correspondence exchanged with the leader of Borno in the 1800s is here revealing. After attempting to invade the kingdom that had existed since the ninth century, dan Fodio tried to convince Mohammed el-Kanemi of the religious and legal merits of his struggle. For dan Fodio, the jihad was mainly (but not only) conceived as a way of reforming lax Muslims by pure Muslims.

In the 1970s, some historians stressed an ethnic dimension in the jihad of Sokoto. According to this interpretation, dan Fodio was the descendant of Fulanis installed in Hausa regions since the fifteenth century, and would have pitted Islam against Hausas. However, even if most leaders of the Sokoto jihad were Fulani, it is difficult to argue that the numerically inferior Fulani would have believed that they could have overthrown the Hausa kings on exclusively ethnic grounds. Dan Fodio himself wrote against any ethnic discrimination in his treatise Bayan Wayan Wujub al-Hijra.

Scholars have also tried to show to what extent the jihad was not totally new in West Africa. Indeed discussions on the place of Islam in society had already taken place before the jihad of dan Fodio whether it was about food bans, marriage laws or clothes that women had to wear. It was this last point that had attracted the attention of Shaikh Jibril b. ‘Umar, one of the masters of Usman dan Fodio. Other jihads had already taken place in West Africa before that of dan Fodio (Bundu, late seventeenth century, Futa Jallon, 1725, Futa Toro, 1776). In other words, some Muslim scholars had already become reformers-conquerors before the advent of Usman dan Fodio.

The religious questioning of the jihad of dan Fodio was therefore not completely original. It is his lasting political victory over a vast territory that ensured his long-term success.

The structure and economy of the caliphate

The first six years of jihad (1804-1810) were fundamental in the creation of a political and religious foundation for a state that was never an empire, but a collection of territories under the authority of the caliph in Sokoto. Indeed the Caliphate of Sokoto was a highly decentralised state ruled by the Caliph. The Caliphate itself was a novel phenomenon in the Hausa regions and conferred moral and political authority on dan Fodio and his successors. Companions of the caliph, Fulani scholars who had become jihadists, were thus placed as emirs at the head of each territorial subdivision who answered directly to the caliph. Because of its size, the caliphate became divided between the western emirates under the authority of Sokoto and the eastern emirates which remained more or less autonomous.

The different successors of dan Fodio had to carry out military campaigns to assert their authority, thus making jihad a virtually uninterrupted phenomenon until the mid-nineteenth century. Mohammed Bello, dan Fodio’s son and direct successor, took the title of sultan and led many campaigns which he likened to the conquest of the Arabian Peninsula by the first Muslims in the seventh century. Bello’s policy consisted of appointing family members as heads of frontier towns, settling Fulani nomadic populations in villages and building fortified villages to monitor some borders. It thus became necessary to ensure the security of the caliphate at its borders but also in the buffer zones between each emirate. Thanks to soldiers recruited during the dry season, the troops of Sokoto could quash any rebellion or Tuareg incursion from the north.

The caliph’s authority derived from his ability to control his borders, redistribute spoils from military campaigns or taxes to allies and members of his family. In replacing the taxes of the Hausa leaders by Islamic taxes like the zakat, revenues of the Caliphate were in theory subject to Islamic law. However, these taxes depended largely on each emirate with, for example, the existence of a property tax in Kano or Zaria outside of the emirate of Sokoto. Sokoto’s centralizing tendencies on the rest of the caliphate were therefore limited by the pre-jihadic structures of the Hausa cities as well as the impossibility of reaching large parts of the population in the countryside.

The caliphate of Sokoto, faithful to the original intentions of the jihad, looked to establish Islamic law in the courts of the whole caliphate. The need for educated men encouraged the emergence of schools in urban centres, even though the first years of the Caliphate were marked by a shortage of qualified personnel. Indeed, a defining feature of the Caliphate of Sokoto was the literate staff working in the administration of each emirate. Born free or in slavery, these men formed part of a functioning bureaucracy.

It was once again the lack of labour which provoked the numerous expeditions with the aim of capturing slaves to either sell or to make work in the plantations and other places of production of the caliphate. Thus, work in the salt mines of the north of the caliphate was based on slave labour. The same applied to the iron, cotton, indigo, or leather industries of the central regions of the caliphate. The wealth of the state was therefore based on a servile economy fuelled by wars or raids. North African merchants provided a number of slaves in the town of Kano of the 1820s: for every freeman there were thirty slaves in the city.

Islam, which had penetrated the Hausa regions during the fourteenth century via travellers / traders from neighbouring Borno and regions north of the Sahara, spread through jihad. The pre-Islamic religions, often called ‘traditional’ religions, persisted but the Islamic culture permeated the whole region through books written by the family of dan Fodio or sold through the Sahara. Whether through the pilgrimage to Mecca, trade or the dissemination of brotherhoods, the Hausa regions became more and more integrated with the Muslim world. While the phenomenon of integration within the Muslim world may have existed before, the jihad greatly accelerated the process.

The fall of the caliphate

Following a brief British military campaign, the Sokoto Caliphate was incorporated into the protectorate of northern Nigeria in 1903. This date marks the defeat of the Sokoto Sultan against the British armies and the beginning of the colonial period. The British troops, as in was often the case in Africa, were essentially composed of Africans with European officers at their head. Involving predominantly Hausa soldiers, the British conquest might therefore also be understood as the result of an internal war in the Sokoto caliphate. Nevertheless, the Caliphate did not quite disappear entirely in 1903, as the British used the Sokoto Caliphate to build upon their theory of Indirect Rule.

The phrase ‘caliphate of Sokoto’ was not used by the inhabitants of the state created by the jihad in the nineteenth century. In fact, the term ‘caliphate’ was first coined by anthropologist Murray Last in 1967 in his seminal work, The Sokoto Caliphate. Last roots the term in the title assumed by Mohammed Bello and his successors. As amir al-Muminin, the sultan of Sokoto was the de facto caliph; a title that was also used by the rulers of neighbouring Borno between the end of the fifteenth century and the beginning of the nineteenth century.

Kumo, Suleimanu, ‘Colonial Transformation of the Caliphate: The Administration of Justice and the Fate of the Shari’a under Colonial Administration in Northern Nigeria’, in The Sokoto Caliphate: History and Legacies, 1804-2004, ed. by H Bobboyi and Mahmood Yakubu (Kaduna: Arewa House, 2006), I, 285–96

Lovejoy, Paul, ‘The Jihad of ’Uthman Dan Fodio in the Central Bilad Al-Sudan’, in Jihad in West Africa during the Age of Revolutions. (Athens: Ohio University Press, 2016)