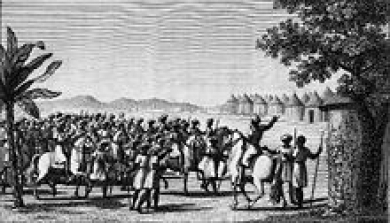 The army of Futa Toro in march (1820) Wikipedia

If Alhaji Salim Suwareh did not raise the sword to spread Islam, Al Hajj Umar Tal (1797-1864) did and with as much success as the Jakhanke missionaries.

Before we examine his eventful life, we might as well start our discussion with his swift jihads in present day Mali and Guinea Conakry which lasted from 1848-1864. His first target was the gold states of Bambuk and Bure then ruled by and inhabited by animist Malinke. Within  a short period of six years between 1848-1854, he conquered and forcibly converted the Malinke of Bandjogou, Bougary and Farabana all in present day Republic of Guinea Conakry. He raised the flag of Tijaninya sect of Islam and pitched his tent at Jalafara, his first capital. His success  pushed him to attack the Bambaras of Kaarta and Segou, and the animist Fulani of Macina, in present day Republic of Mali. By 1854 Tal had established a huge Muslim state which included aarta, Segou, Macina, and Khasso. He had brought the only well organized fighting force in this part of the Sahel, the Bambara, into submission under his Tijaniya sect. The eminent Malian historian Sekene Mody Cissokho commented ‘Al hajj Umar brought Islam to the Western Sudan’ a worthy accolade to this brilliant scholar turned jihadist and empire builder.

But this success was apparent even in his early year. At the age of 23 in 1820, he had finished his studies and was awarded the title ‘alfa’ or scholar. In the same year, he made a pilgrimage to Mecca and stayed in Arabia for 13 years, and was ordained the Kalifa or emissary of the Tijaniya sect in West Africa. He had now gotten the recognition and stamp of approval to lead the jihads in the Sahel. He briefly passed through Kanem Borno, Sokoto where jihads had just been completed and must have learnt some lessons on how to prepare his own in the Sahel.

Cissokho tells us that Umar’s aim was less to destroy existing polities but more to convert their rulers and people from animism into Tijaniay Islam or from Qadriya into Tinjaniya. But we must not attribute his quick success to the sword of the Jihad alone; Umar’s version of Tijaniya was also pro poor, and socially uplifting. He was quick to free slaves for example in conquered territories and assisted the poor and down trodden to meet their basic needs.

Until he met his demise at Dinguiray in 1864 after a bloody encounter with the French, he remained the popular jihadist turned empire builder. His son Amadou Seku replaced him but struggled to wield together the vast Imamate his father had wrought.

Hill, Margari. “The spread of Islam in West Africa: containment, mixing, and reform from the eighth to the twentieth century.” SPICE digest (2009).

Sanneh, Lamin O. “The Jakhanke Muslim Clerics: a religious and historical study of Islam in Senegambia.” (1989).